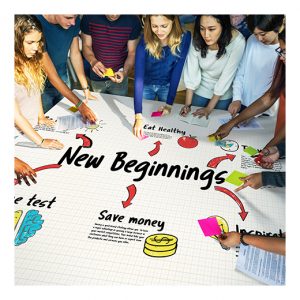 Now the holidays are over, and the New Year’s resolutions are kicking in, it’s time to think about sustainability. Whether you are resolved to eat healthier this year, exercise, or even learn a new instrument, you’ll have to think long and hard about how you’ll accomplish your by-the-end-of-the-year goals. The good thing is you’re not alone. Gaining traction on your New Year’s resolution is a matter of forming a new habit. So it’s important to understand how habits work.

In an interview with NPR, Charles Duhigg discusses his book The Power of Habit: Why We Do What We Do In Life And Business. Everything we’ve made into a routine, from exercising to cooking, from brushing teeth to cleaning laundry, begins with the same “psychological pattern.” This is called a “habit loop.” It’s really simple, actually: every habit begins with a cue, proceeds by routine, and ends with a reward. That’s it!

Let’s look a little closer. A habit begins with “a cue, or trigger, that tells your brain to go into automatic mode and let a behavior unfold.” Then the routine occurs, which is the behavior itself, or the habit. Lastly, the reward is “something that your brain likes that helps it remember the ‘habit loop’ in the future.”

The interesting thing is habits are formed in the part of the brain that has a major influence on “emotions, memories and pattern recognition.” It’s called the basal ganglia. Why is this interesting? Because it’s a separate from the region of the brain responsible for decision making – the prefrontal cortex. And, as a result, when automation kicks in, when habit loops initiate, the prefrontal cortex goes into hibernation.

This is readily available knowledge, at least by quick reference to experience. Think about how difficult the very basics of reading and math once were. We learned by rote memory, by memorizing the alphabet and times tables, and this period of learning required intense concentration. But after a while these things became second nature. It’s because, like any other habit, our focus, determination, and persistence eventually formed habit loops.

Lessons from in the Loop

Because all habits begin with a cue and end with a reward, it’s important, especially if you have big plans for your health this year – to exercise three or four times a week, to cut out sugar from your diet, etc. – to figure out some sort of consistent pattern to follow when you eat, go to the gym, or whatever you may do.

Maybe before a trip to the gym you listen to music you really like as you prepare, and afterwards you treat yourself to some yogurt. When some people crave a sweet snack, they cut up some apples and eat those as substitutes instead.

With new habits, especially healthy habits, old habits are broken. And this means the power of the reward system established by the old habit loop becomes more and more powerless. As you exercise more, your desire to lay around all day will weaken. And as you stay away from sugar, your cravings will diminish.

For more information on habits and the science behind them, you might also be interested in Scientific American’s podcast episode where Dr. Art Markman discusses things like “How to know you have a habit,” “How to work in league with your psychology to from new habits,” and “How we are more likely to succeed when we view failure as part of the process.”

But, most importantly, remember that habits are like cycles: as you reinforce them, they eventually become as automatic and predictable as the sunrise in the morning. Don’t be discouraged by failure. Every mistake is an opportunity to learn, an opportunity to change, and an opportunity to become better at what you are trying to do.

The post How to Break Old Habits and Adopt a Healthy Lifestyle appeared first on Apartments For Us.

Prepare Your Clothes for Storage